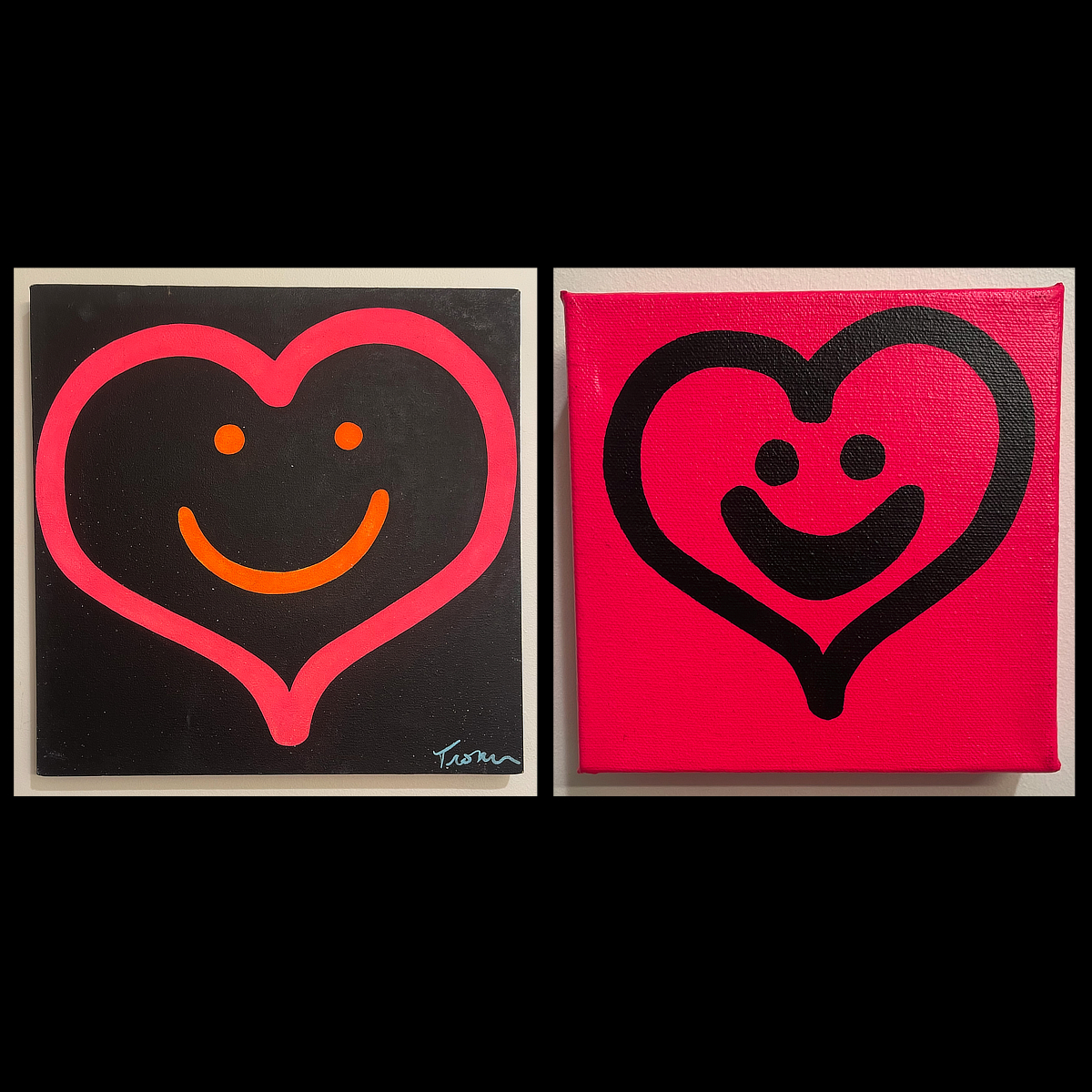 These are the first Smiley Hearts in order of their evolution, paintings, then drawings, followed by digital creations.

The reason TRONN created this new look for the series is to maintain the integrity of the message of all of his work while being able to communicate in a way that is relatable to more people.

In this latest iteration, The Smiley Hearts were reborn as an answer the age old question, "Where does everything come from?" when his 5 year old godson Tristan asked it to him while walking down the beach in Venice CA.

LITA joined the band this year.

THE STILL SHORT BUT NOT THAT SHORT STORY

In 1991, TRONN spontaneously created a canvas of the first incarnation of Happy Hearts for his friend Jonanthan while they were both living in Manhattan.

TRONN made many more over the years but then evolved into other creative periods while being one of the pioneering artists of Wynwood in Miami.

A few years later, while the sun was setting over the ocean in Venice Beach, CA,TRONN's godson Tristan, then aged 5, suddenly asked him, "Where does everything come from?" while they were walking by the sand having ice cream cones.

TRONN explained that everything comes from a singular place that was put into motion by something greater.

Deborah, Tristan's mother, had been secretly listeing and at the end of hearing the story she exclaimed, "You need to go home and write that as a book immediately!" and so he did.

That book was originally called, "A Zillion Happy Faces."

But that all changed a few weeks later, when TRONN's friend Jeffrey, asked him, "Can my sister and I commission you to make one of those Happy Heart paintings that you used to make? We'd like to give it to our parents as a gift for their 45th Wedding Anniversary?" Of course TRONN agreed to the commission, which led to a larger piece being commissioned by Jeffrey for his own collection of contemporary masters.

The culmination of these two seemingly independent but auspicious events brought The Smiley Hearts back to the forefront of TRONN's creative universe.

He then changed the book into, "The Smiley Hearts in: Where Does Everything Come From?"

Since then, TRONN has made dozens of pen and ink illustrations of The Happy Hearts by hand for the book.

And while those drawings are quite alive, TRONN always felt there was something more he wanted to do with them. Now, after years of exploration, those drawings have since evolved into the current iteration of their existence as "LITA & The Smiley Hearts," TRONN's current period of digitally but painstakingly created fine art.